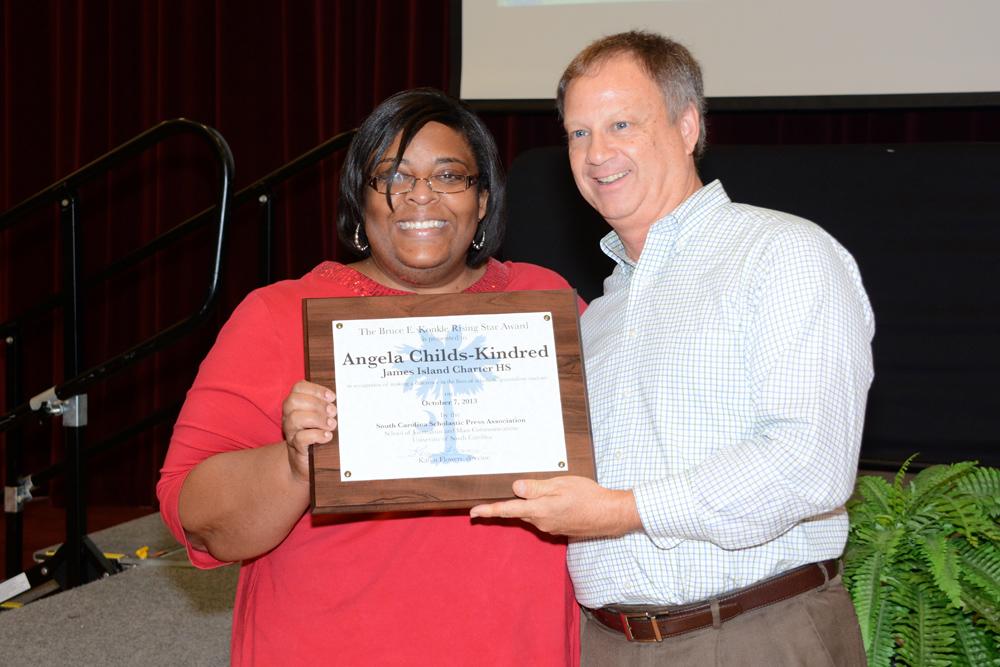 She began advising in 2010, taking over a fading program and soon after that, began taking the publication to new heights.

The adviser and students have produced a publication that received a superior rating from SCSPA and last year turned a $3,000 profit, something that had never been done at the school.

“Her kindred spirit plays a vital role as the adviser for the staff. Students were so excited about taking her class this year. There was even a waiting list!” one of her co-workers said.
“The adviser has transformed a fading program to one of the most profitable and thriving programs at the school.”

Not only does Childs-Kindred work tirelessly as an adviser but is also the adviser of the Future Business Leaders of America and chairperson of the leadership team at the school.

She looks to educate, engage and empower students by having them attend workshops each summer and has FBLA members compete on the national level.

Childs-Kindred also inspires yearbook staff members to give back and become extraordinary leaders in their community. You can find them working to make the publication first-class: constantly taking pictures, working in the library and writing stories for the publication.

The yearbook has escalated in popularity since this rising star began advising. It now takes up two classes and, as one of her colleagues said, the leadership role that this adviser has taken has “helped bring a well-rounded and complete publication to fruition each year.”

Other colleagues have nothing but praise for this adviser.

“The success of having an awesome publication staff can be credited to this yearbook adviser’s vision. Her exuberant personality expresses learning and professionalism and strengthens the support for the program,” one said. “Her modeling motivation reflects the outstanding commitment to educating students.”

“I was absolutely shocked to hear that I was the winner of the award. Being a shy person, accolades make me blush!” Childs-Kindred said. “I credit all of our success to my wonderful yearbook staff and patient students, faculty and administration at James Island Charter High School. They’ve allowed us to continue trying to capture all the memories so our students will have a yearbook to remember.”

The award is named for Bruce Konkle, SCSPA’s director for 17 years, from

1985-2002. Bruce has been a mentor to many of in South Carolina, and although he no longer directs SCSPA, he is still is a staunch supporter of SCSPA and other scholastic journalism organizations across the country.

The purpose of the Rising Star Award is to recognize an adviser who is making a difference in the lives of scholastic journalists in South Carolina by modeling what it’s like to be excited about learning, by encouraging professionalism in media production and by creating excitement in the classroom for the love of written, verbal and visual communications.

Because this award is for a “rising star,” the teacher’s experience in advising must be between one and five years.