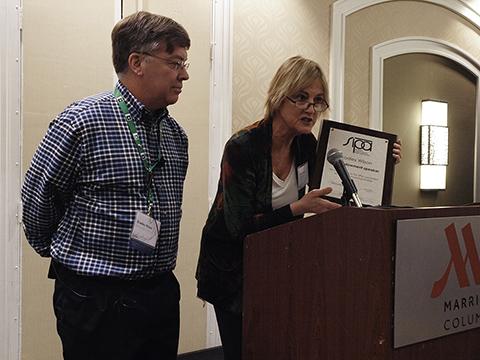 When the SIPA Endowment committee had to choose their fourth-annual Endowment Speaker, it didn’t have to look far.

The members looked within their ranks and found Mary Inglis, a rock star in the scholastic journalism field and SIPA Endowment member since it’s inception 22 years ago.

Now, the self-proclaimed “cheerleader, historian and activist” will get a new title this year as the 2017 Endowment Speaker.

“I have to admit I am looking forward to getting a really cute outfit. I am still pretty thunderstruck at being nominated, not to mention, chosen, as the people who frequent SIPA are the cream of the crop,” Inglis said. “It will make me feel humble, proud, and thankful that these people are honoring me. That makes me think, now, we could do a fundraiser and people who want their picture taken with me could pay $1.00 to the SIPA Endowment Fund.”

The English and journalism teacher at Wellington High School in Florida has worked with three different SIPA Directors: Beth Dickey, Karen Flowers and Leslie Dennis. She still works with Dickey and Flowers who serve with her on the Endowment Committee.

The two helped select Inglis as the speaker at the annual fall meeting and have nothing but nice things to say about her.

Dickey called her a “special friend” and said Inglis has been a staple at SIPA conventions throughout the years and her entertainment and enthusiasm is one of a kind.

A “cheerleader who never wore a uniform,” Inglis joined the Endowment when it started, first by making a donation in the name of her late father who died just before the 1994 convention.

Since then she’s earned nicknames like the “candy lady” by selling sugary snacks at conventions. She’s traveled around meeting famous people and animals in odd places, she said, as well as making a trip to Myrtle Beach during a Hurricane and spending $100 on a taxi.

She said the people she works with at SIPA are “some of my dearest (friends) in my adult life,” and they all care about the Endowment’s goals of raising money and providing opportunities for high school journalism programs.

That’s why, she said, endowments are vital to any nonprofit organization.

“They come in handy, like umbrellas never used, on rainy days,” she said. “Endowments for organizations like SIPA are like paying it forward. If it made a difference in your life, then it will make a difference in someone else’s life whose life circumstances might be different than yours.”

As the Endowment Speaker, Inglis will teach sessions at the 2017 SIPA convention and will speak at the Saturday luncheon for advisers and Endowment members. She joins previous SIPA legends David Knight, Mark Murray and Bradley Wilson as journalism professionals who’ve won the distinction.

“I certainly am not the walking AP Style Book nor a person who even majored in journalism. But I love, love, love being an adviser of a publication, and I know how to do that fairly well,” she said. “I want to tell other advisers and students how to love their publications and their journalism family. I can do this by sessions that speak to organization, experience, and longevity.”